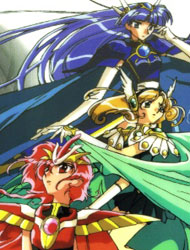 Soon after Hikaru, Umi, and Fuu return to Tokyo, the three of them meet at Tokyo Tower to talk. Hikaru says that she wishes they could return to Cephiro and do something good for the land that Princess Emeraude protected so dearly. Umi and Fuu agree. Suddenly, a light appears in the sky and they are transported to Cephiro. Clef explains to them that with no Pillar to keep Cephiro peaceful, it has fallen into chaos. Monsters are multiplying and the land is becoming desolate. All the remaining inhabitants of Cephiro have moved into a magical castle. Clef also tells the girls some alarming news; three other countries, Chizeta, Fahren, and Autozam are trying to invade Cephiro and take over the Pillar system for their own purposes. The girls must stop the invaders as well as the mysterious and evil Lady Debonair, who believes she is the rightful Pillar, all the while desperately hoping and searching for a new Pillar to make Cephiro into the beautiful land it once was.